Surveying is the art of determining the relative positions of points on beneath, above or on the surface of the ground by the direct or indirect way of measurements of distance, direction, and elevation.

METHOD OF SURVEYING IN CIVIL ENGINEERING

Plane surveying is done by state agencies as well as private agencies. As we know the earth is spherical in shape but its diameter is big to consider plane in minor dimensions. It is that type of surveying in which the mean surface of the ground is taken as a plane and the spherical shape is ignored. All triangles produced by survey lines are taken as plane triangles. The level line is taken as straight and plumb lines are taken as a parallel. Plane surveying is done in an area of fewer than 250 km2.

The geodetic survey is taken by the survey department of the nation. Surveying in which the curved shape of the earth is taken into a field. The object of the geodetic survey is to calculate the precise position on the surface of the ground, of a system of early distant points which form stations in which surveys of less precision may be calculated. The line joining two points is taken as a curved line and angles are assumed as spherical angles. It is carried out if the area more than 250 km2.

Surveys may be classified based on the nature of the field and instruments used.

1) Surveying based on Nature of Survey

The hydrographic survey is taken out to determine Mean Sea Level (M.S.L), water spread area, depth of water bodies, the velocity of flow, in the cross-section area of flow.

The Astronomical Survey is carried out to determine the absolute location of any point on the surface of the earth. The survey holds of making observations to a heavenly body such as stars.

This survey is undertaken whenever sufficient data is to be collected for the purpose of planning and designing engineering works such as roads, bridges, and reservoirs.

This survey is taken out to gather information about sites that are important from archeological considerations and for unearthing relics of ancient past.

In this survey, information is gathered by taking photographs from points using a camera.

In this survey data about large tracks of land is gathered by taking photographs from an aero-plane.

In this survey, data is gathered by marking physical observation and some measurements are taken by using survey instruments.

Surveying based on Type of Instruments

Chain surveying is the simplicity and the oldest type of surveying. The principle used in the chain survey is triangulation. The area to be surveyed is parted into a number of triangles. Angles of triangles should not be less than 30 degrees and must greater than 120 degrees. Equilateral triangles are assumed to be ideal triangles. No angular measurements are calculated, tie line and check lines provide accuracy of the work.

This method is suitable on level ground with fewer undulations and areas to be surveyed should be large.

Compass survey is based on the principle of traversing. This method does not require to create triangles. It uses a prismatic compass for measuring the magnetic bearing of line and the distance is measured by the chain. A series of connecting lines is prepared using the compass and measuring distances using a chain. Using offset from main survey lines, Interior details are located.

This surveying is suitable for large area surveying crowded with more details. It is used to survey a river course. 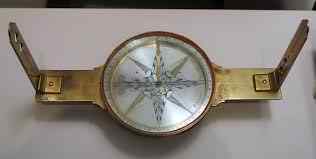 The principle of a plane table survey is based on parallelism. The relative points are directly plotted on the paper. The rays are drawn from station to object on earth. The table is placed at each of the relative station parallels to the relative position of the last station.

They are basically good for filling internal detailing and used when more accuracy is not needed.

The theodolite is an instrument that is commonly used for accurate measurement of the horizontal and vertical angles. They are approximate to measure up to 10″ or 20″ angles.

Theodolite can be used to measure: Nowadays theodolite is less in use and replaced by the use of Total Station which can perform the same task with greater accuracy and can give accurate results.

A tachometer is a part of surveying in which both horizontal and vertical distances are calculated by taking angular measurement with an instrument known as a tachometer. Tacheometer is the same as theodolite but a transit theodolite fixed with a stadia diaphragm and an analytic lens. There is no use of chaining in this survey. The principle of the Tacheometer is depended on properties of the isosceles triangle, where the ratio of the distance of the base from the apex and the length of the base always remains constant.

2. For making navigation routes and harbors and hydrographic surveying are used.

3. To help in military strategic planning and in military maps are prepared by surveying.

4. To determine different strata in the earth crust, geological surveys are needed.

5.  For exploring mine and mineral wealth survey is needed